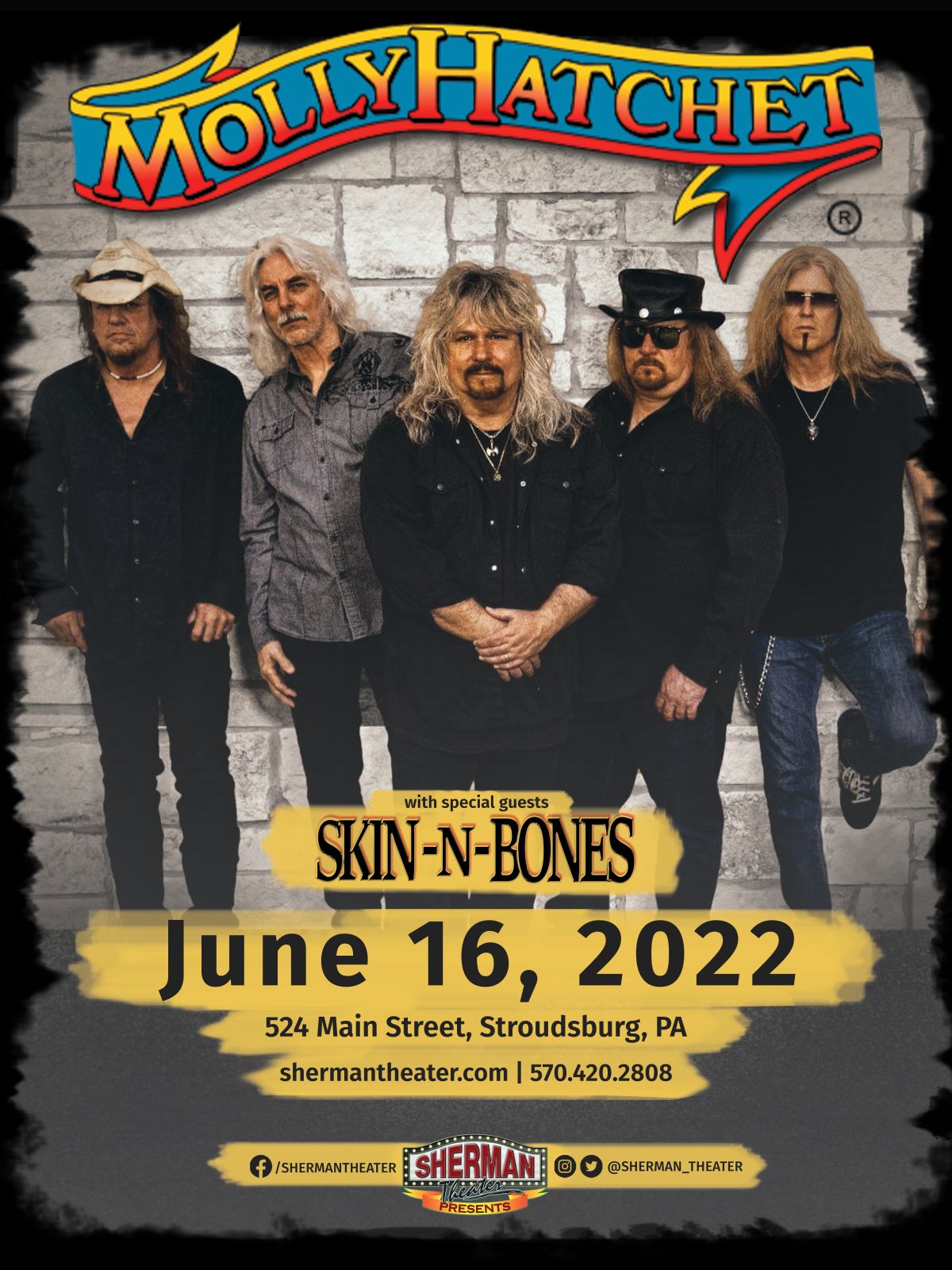 All Ages Admitted // 21 to drink with ID
Tickets on sale to the General Public – (//)
General Admission Standing – there isn’t a bad spot in the house!
Reserved Balcony seating available for Sherman Theater Members only
For membership information, please contact [email protected]

Molly Hatchet firmly cemented their place in music history in the late seventies. They stood alongside other iconic Southern rock bands out of Jacksonville, Florida, such as Lynyrd Skynyrd and the Allman Brothers.  A perfect mixture of English invasion rock, blues, country, and gospel remains the unique sound of Molly Hatchet.

They were the hardest hitting of the Southern rock bands at the time when, in 1978, Epic Records released Molly Hatchet’s self-titled debut album.  It reached multi-platinum status, and the band established their reputation of working hard, playing tough and living fast through intense touring. During this time, they were on the road with Aerosmith, Bob Seger, The Rolling Stones, and many others.

In 1979, Molly Hatchet’s second album Flirtin’ with Disaster was released, and it also quickly achieved multi-platinum status.  It skyrocketed the band into the stratosphere and performing an average of two hundred and fifty shows per year kept them busy.

In 1987, Bobby Ingram joined the band as lead guitarist and songwriter. They continued to play over two hundred dates a year. In 1989 they recorded Lightning Strikes Twice on Capitol Records. The Greatest Hits album was released in 1991 and certified gold.

In 1996 Devil’s Canyon (the first studio album in six years) was recorded in Hamburg, Germany on SPV/CBH Records with producers Kalle Trapp and Bobby Ingram.  The album was voted the number one rock record in Europe in 1996 with rave reviews.

The band’s current lineup consists of long-time members Bobby Ingram on lead guitar and John Galvin on keyboards, as well as Tim Lindsey on bass guitar and Shawn Beamer on drums, with Jimmy Elkins on vocals.  Molly Hatchet continues to honor the legacies of those members who passed away (including Danny Joe Brown, David Hlubek, and Phil McCormack) by keeping the music alive, performing across the United States, and throughout the world.

Molly Hatchet celebrated their 40th anniversary with a world tour and the release of the double CD and triple vinyl live album titled Battleground.  Recorded in both Germany and Switzerland on the SPV/Steamhammer label and featuring cover art by famed artist Paul Raymond Gregory (Dio, Uriah Heep, Saxon), Battleground has garnered rave reviews by their loyal fans, as well as the national and international press.

According to Bobby Ingram, “In recording this album, we compiled a four-decade long catalog of songs that our friends wanted to hear.  They would tell us what songs they wanted on the album, and we would record them.  Some of these songs have never been recorded on a live stage before, and we were honored and proud to be able to perform them for many generations of past, present, and future Southern rock fans.” 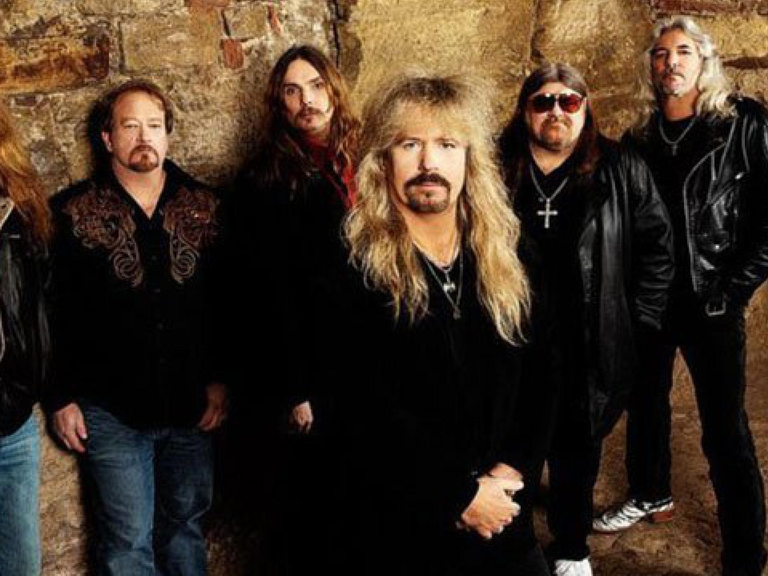 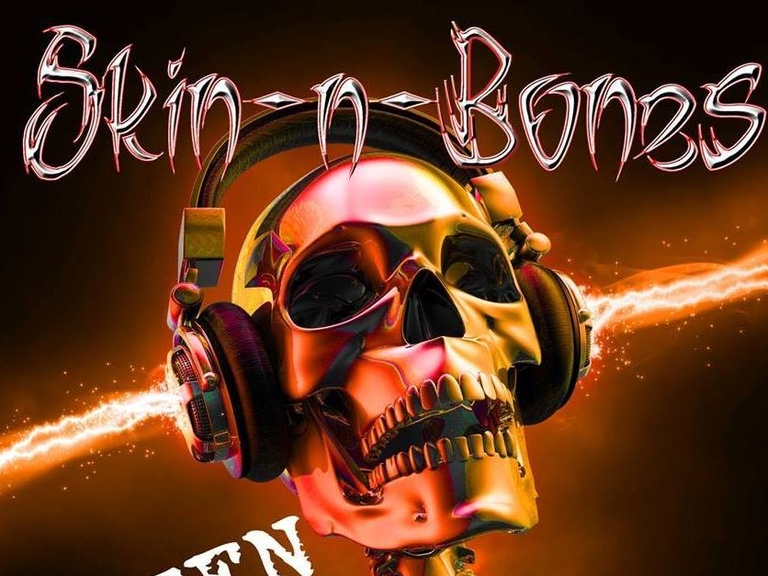 Skin-n-Bones strips rock to its barest essence. The Scranton-based quintet built a hardcore following around its self-described brand of “dirty rock and roll.” The band just released its newest album of, “Listen Up.” For “Listen Up,” Skin-n-Bones worked with well known producer and musician Bret Alexander, formerly of the Badlees. Made up of veteran local musicians — Rob Rosencrans on lead vocals, Donny Engle on guitar, Todd Costantino on bass guitar, Paul Davies on drums and John Roman on guitar — Skin-n-Bones formed in 2009. Inspired by legendary acts like Led Zeppelin, AC/DC, Aerosmith and Guns N’ Roses, the band made a commitment to churning out “live, in-your-face rock and roll,”The band released its debut EP in 2010 while slowly building a fanbase. They helped their cause by landing opening slots for several national touring acts, including Charm City Devils, the Romantics, Jackyl, Queensryche, Tantric, Great White, Pop Evil and Trapt. Like those bands, Skin-n-Bones’ set lists consist entirely of original songs — no covers. Meanwhile, the band is now in the process of booking a series of gigs in the coming months to promote “Listen Up.” “We’re just trying to get on the road and push it. I think when you hear it, you’ll like it, “We’re just trying to get it out there. Any way we can. We just want to be heard.” 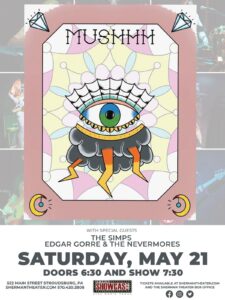 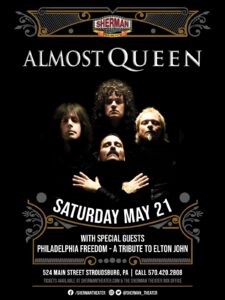 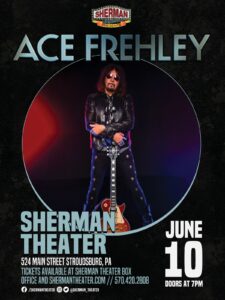